No mountains detected yet on millisecond pulsars

A recently released pre-print by the LIGO Scientific Collaboration and Virgo Collaboration reports the most sensitive test yet of the ellipticity of millisecond pulsars. Researchers in the gravitational-wave astrophysics group at UBC played a key role in new results for five known pulsars using data from the most recent LIGO and Virgo observing run.

“This result is very exciting because the detectors are finally sensitive enough for us to learn something new about the structure of these rapidly spinning neutron stars,” said Dr. Evan Goetz, a research associate at UBC and co-chair of the LIGO Scientific Collaboration continuous waves working group.

Neutron stars–the relic cores of massive stars–can be observed with light as “pulsars” when strong electromagnetic emission (radio waves, for example) sweeps across the Earth as the dead star spins, like a lighthouse.

Observations of the pulsar light waves, like those collected by CHIME, can tell scientists how quickly the neutron stars are spinning, and how their spins change over time. Researchers can use pulsar data to accurately predict what the gravitational wave signal of a neutron star would look like, permitting more sensitive gravitational waves searches. 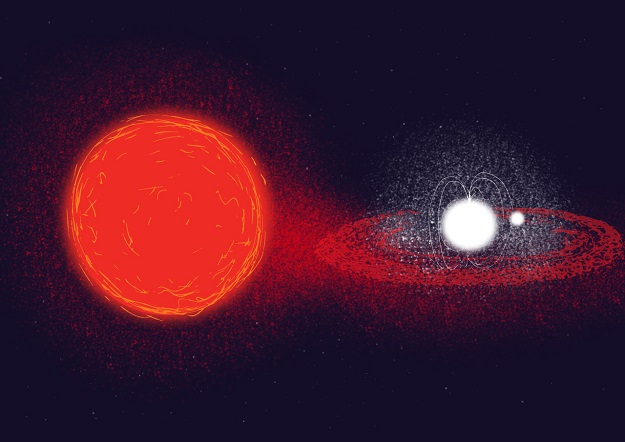 This is an artist’s impression of millisecond pulsar PSR J1023+0038 (white object on the right with magnetic field lines). It extracts matter from its companion star (red object on the left) via an accretion disk (also shown in red). Image credit: European Space Agency (ESA).

Millisecond pulsars are especially intriguing because they have likely undergone accretion from a binary companion at some point in their history. Accretion “spins up” the rotation to high levels–the fastest observed pulsar to date spins over 716 times in 1 second! Some theories predict that this process may introduce asymmetries.

This new paper reports updated search results for three millisecond pulsars as well as the slower spinning Crab and Vela pulsars. Although no signals were detected from these five pulsars, the results are the most sensitive to date. For the first time, the spin down limit of a millisecond pulsar was exceeded–a milestone achievement.

The spin down limit is the amount of gravitational wave energy that would need to be emitted in order to account for the very slow decrease in rotation speed observed in pulsars. The sensitivity of previous gravitational wave searches exceeded the spin down limit for a handful of isolated, more slowly spinning neutron stars (the Crab and Vela pulsars most notably). Millisecond pulsars are more interesting because their very rapid spin rate can be used to better test the physics of dense matter.

“We still don’t know that much about neutron star composition,” said Dr. Goetz. “Detecting continuous gravitational waves from even a single source would enable a host of discoveries and new understanding. This result brings us one step closer to those discoveries.”

Gravitational waves are tiny ripples in the fabric of spacetime that carry information about the movements of massive objects in the Universe, like black holes or neutron stars.