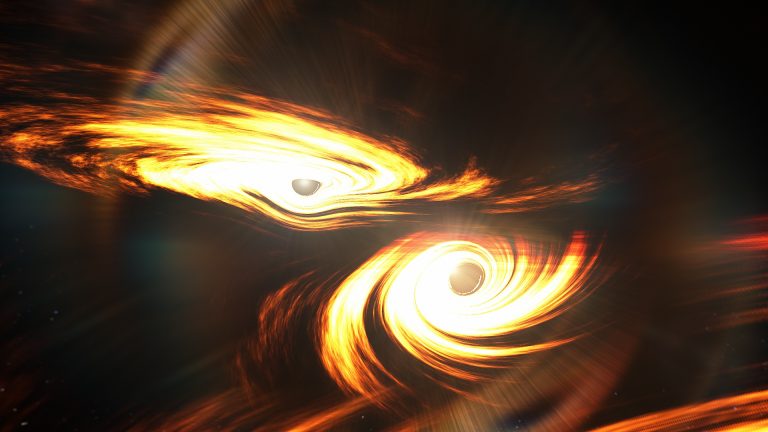 An international team of researchers, including scientists with the University of British Columbia’s gravitational wave astrophysics group, has detected a signal from the most massive black hole merger yet observed. The discovery, outlined in papers published today in Physical Review Letters and The Astrophysical Journal, raises a slew of new questions about the nature of black-hole formation, and upends previously held theories about how big holes can get.

On May 21, 2019, the Laser Interferometer Gravitational-Wave Observatory (LIGO) detectors in the U.S. and the Virgo interferometer in Italy picked up the signal of a gravitational wave—a ripple in the curvature of spacetime caused by a cataclysmic cosmic event. The signal, named GW190521, was shorter in duration, and peaked at a lower frequency, than any other binary black hole merger observed to date.

Analysis of the data revealed that the 0.1-second signal came from the merger of two black holes—the first about 85 times as massive as the sun, and the second measuring about 65 times the sun’s mass. The spectacular smash-up created an even more massive black hole, of about 142 solar masses, along with an enormous amount of energy equivalent to around 8 solar masses, that was shot across the universe in the form of gravitational waves.

“When I first saw the shape of this signal I was a bit worried. It looked quite similar to common LIGO detector noise,” said co-author Jess McIver, assistant professor of physics and astronomy, who leads UBC’s gravitational wave astrophysics group and the international LIGO Detector Characterization team. “But as we analyzed it and saw how consistent the data between the detectors, and as we worked through all of our environmental sensors and our usual checks to make sure that there was nothing that could have possibly propagated across the earth that might mimic this, we were able to confirm it.”

GW190521 was generated by a source that is about 5 gigaparsecs away, or about 17 billion light years from Earth, making it the most distant gravitational-wave source detected so far. The source has a red shift of 0.8, meaning that since the gravitational waves were first produced, the universe has expanded by a factor of 1.8, almost doubling in size.

The discovery of GW190521 means that scientists have detected what, for many years, has been considered an astronomical holy grail: an intermediate mass black hole, larger than a stellar-mass black hole and smaller than a supermassive black hole.

To find GW190521, McIver’s group had to analyze mountains of data to confirm its astrophysical nature. For previously reported gravitational-wave merger events, the LIGO and Virgo detectors registered many cycles of the compact objects orbiting each other in space before colliding. However, GW190521 is so heavy that its signal rose above the lowest sensitive frequencies of the detectors only tenths of a second before coalescence, making it much harder to distinguish from transient noise in the LIGO and Virgo detectors, which can also appear as short bursts in the data.

In a previous paper, UBC postdoctoral fellow Dr. Miriam Cabero Mueller investigated an insidious source of glitches in the Advanced LIGO detectors that don’t register in environmental or detector sensors and tend to have a very similar morphology to high mass signals like GW190521. Researchers at UBC and around the world have leveraged this improved understanding of glitches and their properties in order to extend the reach of searches for gravitational waves further into deep space.

“We have to establish a high level of confidence in this discovery, since this is the first time a system like this has been observed,” said Evan Goetz, research associate at UBC who has worked with LIGO for 15 years. “We find that GW190521 is the first conclusive observation of an intermediate mass black hole. In order to make a confident detection, we need a deep understanding of LIGO and Virgo noise sources that could mimic a signal like this.”

What’s more, the two progenitor black holes that produced the final black hole are so massive that scientists suspect they may not have formed from a collapsing star, as most stellar-mass black holes do. According to the physics of stellar evolution, stars between 60 and 130 times the mass of the Sun—a range that is known as the pair instability mass gap—are predicted to die in a pair instability supernova, in which the star completely blows apart with no black hole remaining.

“The fact that we’re seeing a black hole in this mass gap will make a lot of astrophysicists scratch their heads and try to figure out how these black holes were made,” said Virgo member Nelson Christensen, director of the Artemis Laboratory at the Nice Observatory in France. 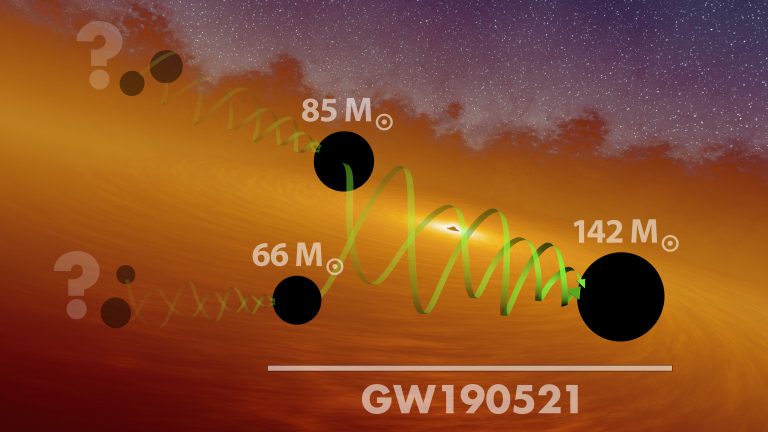 These findings may indicate that massive stars can collapse into high-mass black holes after all—or whether a cascade of black hole mergers has occurred. One possibility proposed by the researchers is that is of a hierarchical merger, in which the two progenitor black holes themselves may have formed from the merging of two smaller black holes. The two black holes may also have formed in separate systems before migrating together and eventually merging.

Scientists are also considering the possibility that GW190521 isn’t from a binary black hole merger at all. As LIGO and Virgo detectors listen for gravitational waves passing through Earth, automated searches comb through the incoming data for interesting signals. These searches can use two different methods: algorithms that pick out expected wave patterns in the data produced by compact binary systems; and more general “burst” searches, which essentially look for any signal that stands out above detector noise.

In the case of GW190521, it was the burst searches that picked up a slightly clearer signal, opening the small chance that the binary event has previously unobserved properties that are not well described by current models—or even that the gravitational waves arose from something other than a binary merger.

Other sources for the signal put forward by the researchers include the possibility that the gravitational waves were emitted by a collapsing star in our galaxy. The signal could also be from a cosmic string produced as the universe inflated in its earliest moments. Or it could be the product of two (hypothetical) “primordial” black holes, formed in the Big Bang, and merging billions of years later.

“It’s just a really astounding discovery,” said McIver. “Not only is this going to change the way that we’re thinking about black holes, but it demonstrates the capacity for gravitational waves to discover new phenomena in the Universe that we can’t see with light.”

In a previous paper, UBC postdoctoral fellow Dr. Miriam Cabero Mueller investigated an insidious source of glitches in the Advanced LIGO detectors that don’t register in environmental or detector sensors and tend to have a very similar morphology to high mass signals like GW190521.

Miriam: “For heavy black holes mergers, current gravitational-wave detectors can only measure the final moments of the binary. Hence, the observable signal is very short. Blip glitches are a type of terrestrial detector noise of short duration, similar in shape to the signal from heavy black holes merging.”

Researchers at UBC and around the world have leveraged this improved understanding of glitches and their properties in order to extend the reach of searches for gravitational waves further into deep space. UBC students are also making key contributions to exciting results from LIGO and Virgo’s recent observing run, including current UBC student Robert Beda and recent alumni Katie Rink and Maryum Sayeed.

Gravitational waves are tiny ripples in the fabric of spacetime that carry information about the movements of massive objects in the Universe, like black holes.