A global team of scientists, including researchers at the University of British Columbia (UBC), have detected thirty-five new gravitational wave events, including colliding black holes and neutron stars. The new events, detailed in today’s paper, bring the total number of observed events to 90 since the first detection of gravitational waves in 2015.

Gravitational waves are tiny ripples in the fabric of spacetime that carry information about the movement of massive objects in the Universe, like black holes and neutron stars. “As the number of detections grows, we can learn more about these objects, including how massive they are when they form, how quickly they are spinning, and how far from Earth they are,” says Alan Knee, a UBC doctoral student in astronomy, who contributed to the analysis of the events. “In doing so, we can better understand how they form and evolve.”

The catalogue and three companion papers, published on arXiv and soon to appear in Physical Review X and other journals, updates the list of all gravitational-wave events observed to date, using three international detectors: the two Advanced Laser Interferometer Gravitational-Wave Observatory (LIGO) detectors in Louisiana and Washington state in the US, and the Advanced Virgo detector in Italy. 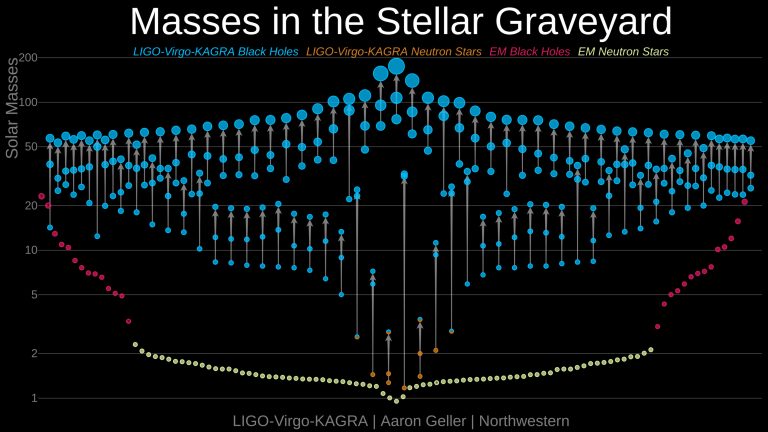 This diagram shows the estimated masses of all known dead stars, as measured by telescopes and by gravitational waves. The dead stars observed with telescopes (black holes in red and neutron stars in yellow), are all within or very near our own Milky Way galaxy. The dead stars observed with gravitational waves (black holes in blue and neutron stars in orange) are mostly very distant – some were detected billions of light years away! Objects in the “mass gap” between neutron stars and black holes, where there are few definitive measurements, are marked as half blue and half orange. (Credit: Aaron Geller/ Northwestern/ LIGO-Virgo-KAGRA)

Data taken during the last half of the most recent observing run (November 2019 to March 2020)  have been analysed by scientists from the LIGO Scientific Collaboration, the Virgo Collaboration and the Kamioka Gravitational Wave Detector (KAGRA) collaboration. Of the 35 events detected, 32 were most likely to be black hole mergers, where two black holes spiral around each other and finally crash together, emitting a burst of gravitational waves.

“These catalogues are hotly anticipated by astrophysicists because with enough detections we can start to see patterns,” says co-author Dr. Jess McIver, assistant professor of physics and astronomy at UBC, who led the data quality sections of the analysis. “One detection of a new type of source is a discovery, two is confirmation, and the more we observe, the better we can measure how common or rare newly observed objects like intermediate mass black holes are.”

Two of the 35 events spotted were likely to be neutron stars and black holes merging – a much rarer event, and one that was only discovered in the most recent observing run of LIGO and Virgo. The masses of black holes and neutron stars are clues to how massive stars live their lives and die in supernova explosions.

“It is exciting to find more surprising gravitational wave sources that help reveal what is happening in some of the most cataclysmic astrophysical events. Our measurements offer a unique probe that would otherwise be invisible to scientists,” says Dr. Evan Goetz, research associate in physics and astronomy at UBC, who contributed to calibrating and characterizing the LIGO data for astrophysical analysis. 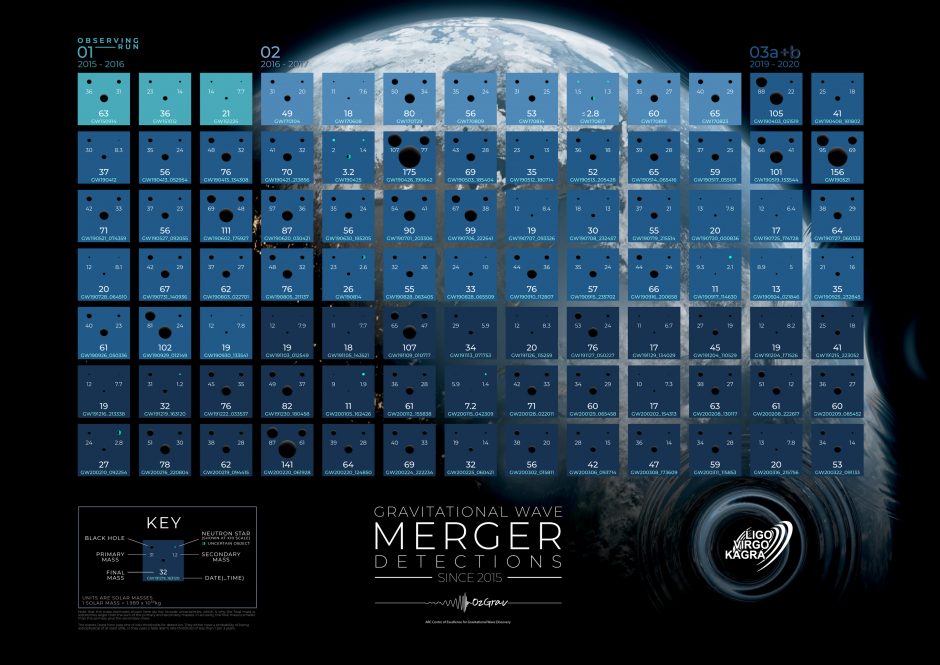 This calendar shows all gravitational wave events detected by LIGO and Virgo so far, starting from the first observing run (O1), through this latest catalog release of the last half of the most recent observing run (O3b). (Credit: Carl Knox/ OzGrav/ Swinburne University of Technology)

Dr. Christopher Berry, a lecturer at the University of Glasgow, explains: “Only now are we starting to appreciate the wonderful diversity of black holes and neutron stars. Our latest results prove that they come in many sizes and combinations—we have solved some long-standing mysteries, but uncovered some new puzzles too. Using these observations, we are closer to unlocking the mysteries of how stars, the building blocks of our Universe, evolve.”

One notable gravitational wave event in the new catalogue came from two objects merging, one almost certainly a black hole and the other either a very light black hole or a very heavy neutron star of around 2.8 times the mass of our sun. The mass of the lighter object is puzzling, as scientists expect that the most massive a neutron star can be before collapsing to form a black hole is around 2.5 times the mass of our sun. Observations with electromagnetic radiation have revealed an apparent ‘mass gap’ between the lightest black holes and the heaviest neutron stars, where objects seem to be missing, says Alan Knee. “The two new objects provide further insight into this elusive mass gap, and highlight the role that gravitational waves will play in studying these exotic phenomena.”

Identifying signals in the detector data requires careful analysis to distinguish real gravitational waves from noise. UBC researchers played a crucial role in this area, identifying data anomalies with the potential to make the data appear inconsistent with Einstein’s theory of general relativity that were actually detector noise. “Careful understanding of noise is crucial for such complex detectors, especially when we’re conducting very sensitive measurements,“ says Dr. McIver. “As the detectors improve, we’ll keep looking for signs of new physics, but so far Einstein’s predictions are still right!”

One such upgrade in future will be the use of new materials for optical coatings, to expand the reach of the detectors. A team of researchers at the Stewart Blusson Quantum Matter Institute is working to develop these materials, which will allow LIGO scientists to not only identify more distant events but also to observe them in sharp detail, says Dr. Kirsty Gardner, postdoctoral research fellow at the Institute. “Improved detectors will unlock a census of dead stars in our local Universe and new tests of Einstein’s relativity.”

GWTC-3: Compact Binary Coalescences Observed by LIGO and Virgo During the Second Part of the Third Observing Run